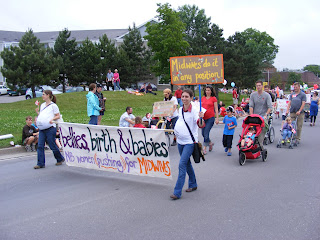 A few of us got together the night before (in typical Siobhan last minute style) to make a banner and ended up doing three and few other placards. The walk itself was a success I think. The aim was to raise awareness and I think we certainly did that. 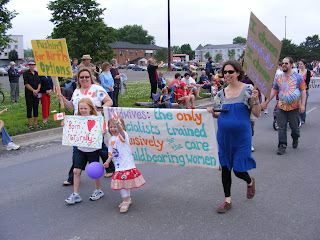 Lots of thumbs up and cheers were directed our way, but many in the crowd looked a little confused so I hope we gave them something new to think about. The local paper's article on their website the next day was followed by a couple of comments about how groups with "controversial" political statements should not have been allowed to take part. This is nonsense on so many levels. There is nothing controversial about midwifery- legislation has already passed and is not in question, it's just a case of waiting and shaping the process. Secondly, and as pointed out in other comments, part of being Canadian is being able to have a say in things like this. Anyway, there is always going to be someone who is not happy. Too many New Brunswickers still think midwives are not as safe as doctors and...
All in all, a great day. In retrospect though we should have had a banner or two mentioning Canada. The whole thing was in celebration of Canada's birthday wasn't it. How old is Canada? I must check.