Well, life is slowly getting back to normal and today was a great day.

To start off, I took the boys for our usual Sunday morning swim at the pool in Cuesmes. It's an older pool but the friendly staff and kiddie pool make it a favorite place in our books. Both of the boys can wade the whole area and Brendan has started to enjoy snorkeling. Even to the point where has started to float and swim on his own while hunting down our newly purchased pool rings which sink to the bottom. As for Tadhg, he loves playing with the toy boats which Nana & Papa bought a ways back.

After that, we headed to the Base, did some groceries and then ended up at the indoor soft play, Imagipark. The boys love it and we actually spent almost two hours there. I really enjoyed watching Brendan and Tadhg following each other around the different play areas. I also love the way I can send Brendan off to find his little brother. He'll lead him back by hand and say "Look Daddy, I found Tadhg and brought him back" with a big ear to ear smile.

From there it was a quick lunch at home followed by their afternoon weekend nap. 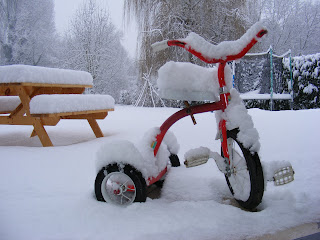 Then, the prescription for us as a family once they woke up... I climbed up into the attic, pulled out a bunch of winter boxes and we all suited up in our snow kit and headed out into the backyard. It has been snowing all day and the backyard just had a wonderful feeling of winter about it. 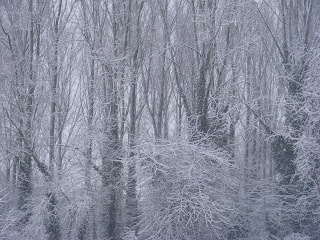 I got busy building a snowman while Siobhan got the boys some shovels to make piles of snow. 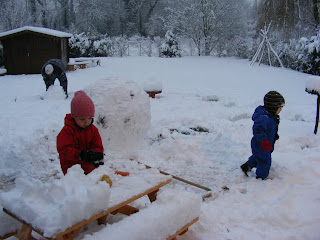 While finishing up the snowman, the boys even had a jump around on the trampoline. Brendan put the eyes, nose and buttons on while Tadhg did the scarf. All said and done, we made a snowman, had a jump on the trampoline, shoveled some snow, threw snowballs (at least Brendan did) and we all sat down to have a cup of warm apple cider (yum-yum). 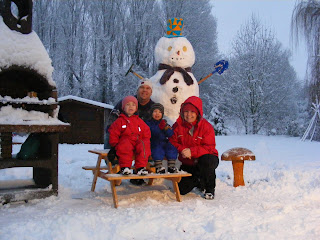 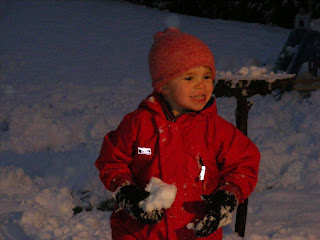 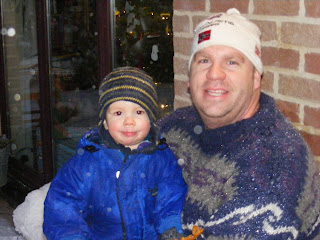 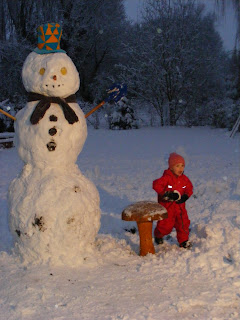 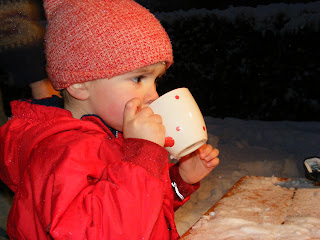 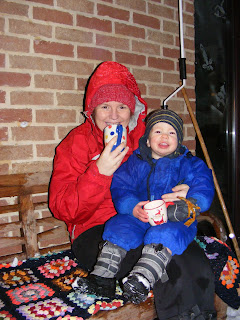 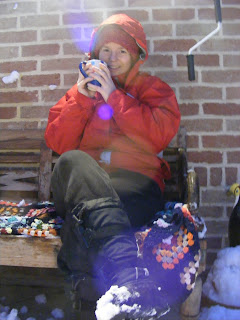 Siobhan will be back up and blogging soon but until then, we just wanted to say 'thank you' to everyone for the great support. It is amazing how life can change very quickly and it is nice to know that when going through a difficult time, friends and family are there to help out.

Oh, two more quickies... This is Tadhg after stuffing his face with the last of my profiteroles and chocolate sauce which B & J brought over last night. 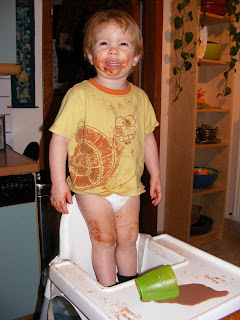 And to my surprise, even Tadhg has become interested in using the mask and snorkel. 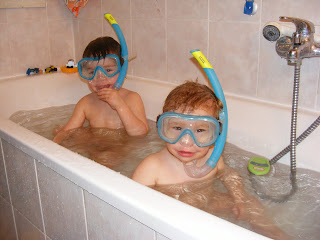