An example of Brendan's love of words.
We have a tummy bug in the house. After the sixth vomiting episode at about 4am this morning, we're just getting back to sleep when Brendan starts prodding me...
"Mum, Mum, listen!"
He continues slowly, enunciating every word...
"I'm SICK of being SICK!"
I open one eye to see a huge smile on his face before we both fall back to sleep.
Then first thing this morning he sees Tadhg and says with evident glee, "Tadhg, listen, guess what I said to mum in the middle of the night. I said 'I'm sick of being sick!'" And he explains the two meanings of sick and thinks it's hilarious. So sweet.

And a story from Tadhg's teacher.

A new boy joined Tadhg's class yesterday. He is a junior in the mixed Junior/Senior Kindergarten class and doesn't speak any English yet. During the morning Tadhg was very kind to him and at recess he played with him outside. On the way in from recess a teacher told Tadhg he was a very kind and caring and was a good person. Fast forward to story time a little later. The teacher wants some of the kids to take charge of some puppets. She says "hmmm, I think we'll let Tadhg choose first, because he has been a very kind boy today." Tadhg totally milks it, puffs out his chest and chooses, "I think I'll be the wolf, hmm, no maybe I should be the mouse, yep, I'll be the mouse because the mouse is the best and I'M the best boy in this class!" Big cheesy grin. 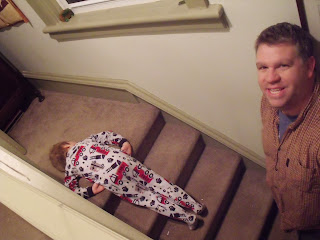 Seeing in the new year is pretty tiring! After walking home from our neighbours' house at 2 in the morning, Tadhg wearily makes his way up the stairs but can't quite reach the top. He drops, fast asleep, and starts snoring draped across the top step!
Posted by siobhan No comments: