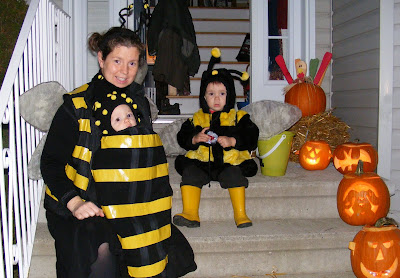 It was my turn to go out trick or treating this year. I'm not usually a fan but I have to admit I had a great time! Steve couldn't miss out completely though, when we got back with Brendan's bucket full of junk food he took him back out again to do another street!
Many people admired our costumes and appreciated that they were homemade. Of the hundred or so kids we saw, probably more, there was only one other costume that was not a store bought one- a young Indiana Jones. We did cheat slightly- the top Brendan is wearing was bought in a thrift store and inspired the whole get up. Below is Steve glueing fabric to coat hanger wings- a good use of some of the fabric we commandeered at Naomi and Sam's wedding. 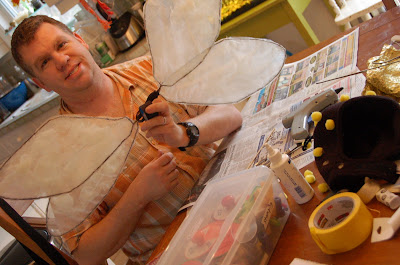 All Hallows' Eve Eve. Carved some pumpkins the night before with Cheyanne. Brian also had four Canada World Youth friends over so though I'd include this photo as it's a better one of him. (if you can see him behind all that hair) 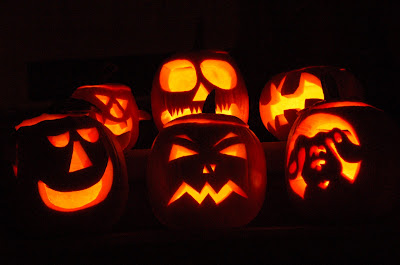 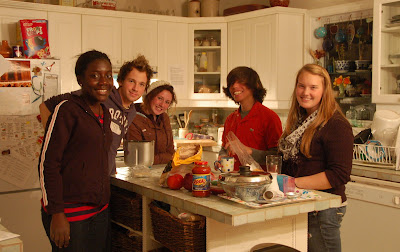 Another one of us heading out. 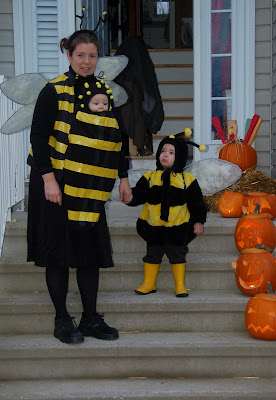 And despite all the sweets and crisps and chocolate, Brendan showed no interest in any of his treats apart from this little crazy eights card game he was given by someone. Good idea. 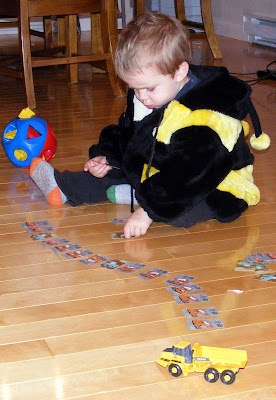 So all in all a happy halloween.

Just finished this needlefelted doll for a friend whose baby is due in a few weeks' time. 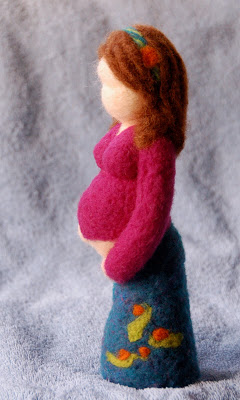 I was a little hesitant to try a human figure as I have painful memories of trying hard (and failing) to make some sort of human likeness out of clay in Art class at school. Needless to say I gave up Art as soon as I could and have regretted it ever since. Like giving up the piano. And swimming. And a hundred other things. But hey ho, I did a hundred different things instead and have no regrets on that front!

We all left the house at the same time this morning- Steve to work on the motorcycle and we went for a walk and to the park. Soon the snow started so we filmed a little clip and took some photos. As the snow turned to rain we headed home and Steve called to say he was coming home again to swap the motorcycle for the van. Good thinking!
So here are the boys heading out for the day. 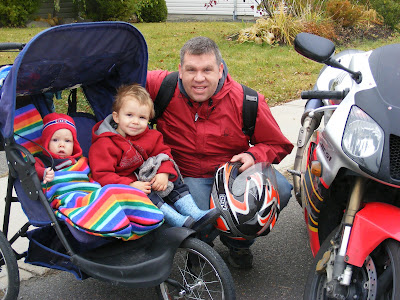 Here we are in the park. 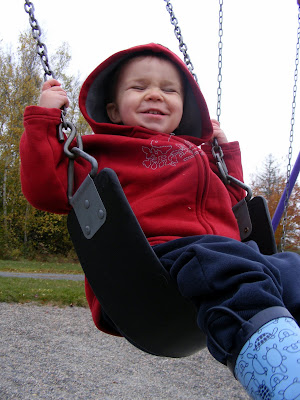 As the snow started I was thinking about King, the Ghanain volunteer living with us. He works outside and this was his first ever snowfall! Very cool.

And here's Steve coming in after his cold, wet ride home. 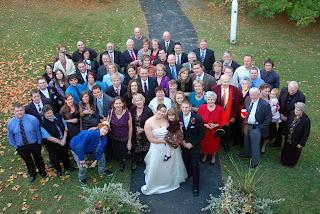 Our good friends Emily and Darcy got married here in Fredericton on Saturday. It was a fantastic day- the weather was gorgeous, the bride was beautiful, the company was wonderful, the food was delicious, the setting was stunning... The whole celebration was great and Steve and I were both delighted to be helping out. I took the formal photos and Steve was the barman. Here are a couple of pics to give a taster of how special the day was. 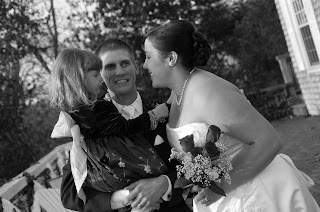 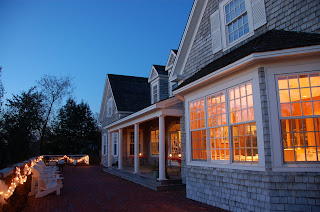 Thanks to Emily and Darcy for letting us share their day.
And another thing... we learned that I can be away from Tadhg for over 10 hours with no worries, although we realise that is mostly due to our superstar of a babysitter. She is invaluable!
Posted by siobhan No comments:

Just wanted to record a couple of anecdotes.

We had all the Canada World Youth participants around for a party- 9 Canadians and 9 Ghanaians and some of their host families. Some of us were sitting around chatting and I don't know how it started but Brendan was telling each person what animal they would be if they were an animal. As in, he looks at someone and says "mmm, a sheep" "mmm, a kangaroo"... so we went round the circle and each person was a different animal. We also had a cow, a donkey and a few others. Then he got to one woman and said "mmm, a dumptruck". Anyway, it was pretty embarrassing, but wasn't so bad after he next called me a bull dozer.

We were in Tim Hortons killing time before we went to collect Steve from the airport. The place was full of people and when a car alarm went off just outside everyone looked out to see a very pregnant woman standing outside the bleeping car obviously talking to a child in the back of the locked car. She held it together and continued to try to convince the child to unlock the car but she was getting more and more frantic. It went on for minutes and I was just about to go out and try to help when the door finally opened. Well, she climbed in the drivers seat and burst in to tears. She was sooo upset. I couldn't just sit there any longer so I asked the two men sitting at the next table if they could watch my children while I went to see if she was okay. I ran out, knocked on the window and she opened the door and said "I'm alright, my kids locked me out" all between huge sobs. She was distraught! I put my arm around her and tried to comfort her and talked to the two little girls in the back and just waited while she calmed down. I started crying too because I totally understood how she was feeling (it hasn't been that long since I was that pregnant) Anyway, it felt like we just shared a moment, you know, powerful emotional stuff. :) Anyway, she had a good cry and then calmed down and thanked me and I left. And will likely never see her again. I won't forget it.

When I went back in and packed up the boys to head to the airport, an older lady at a nearby table said "you have a lovely manner with your kids, I saw how you were letting him choose where to sit and I love the way you speak to them" and a couple of other things. It was lovely! I was still feeling the emotion from comforting the woman in the car so maybe that's why I just felt good- like this is what being a mother is all about! Of course earlier that morning I'd been yelling at Brendan for something or other and threatening him with loosing his toy planes for a while and thinking "man, this is NOT an example of good mothering" but I guess we all have ups and downs.
Posted by siobhan No comments: 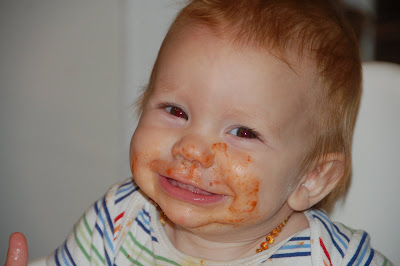 Tadhg brushing his teeth- he climbed up, got his toothbrush, looked in the mirror and started chewing on his toothbrush all by himself. Only just turned 10 months- think he'll be a competent climber when he grows up :) 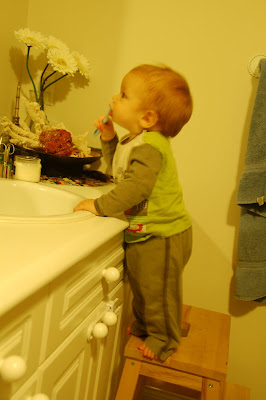 Story time in Brendan's room. Tadhg and I were sitting in the opposite corner listening to the story and having bedtime milk. 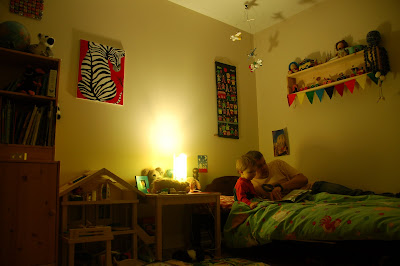 This was how Steve and I spent a fun hour or so after the boys were asleep. Brendan is airport and aeroplane crazy. He has played with this for hours! 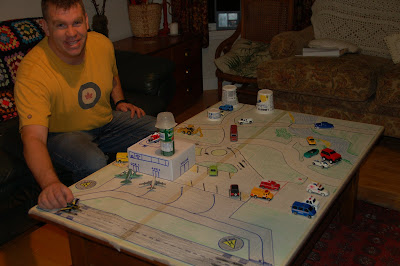 CWY and autumn days outside

the day we got back from Senegal we received an email asking for people interested in hosting two 18/19 year olds for three months to get in touch. A few hours later we had committed to hosting two boys, one from Canada and one from Ghana. They are on a Canada World Youth programme, spending three months in a community in Canada and then three months working on a development project in Ghana. It's all about youth participating in the development process. Seems like a good programme- the kind of thing we hope our boys will be able to do when they are older. So introducing Brian from Toronto and Kingsley from Accra in Ghana. Here they are helping out with putting the garden to bed for the winter. 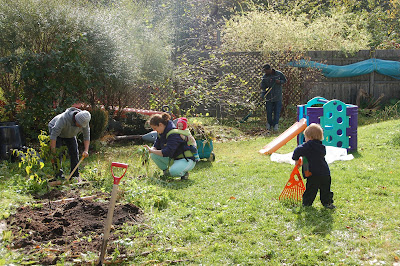 King sweeping the deck. We plan to keep the lower deck cleared of snow so we can play on it this winter. 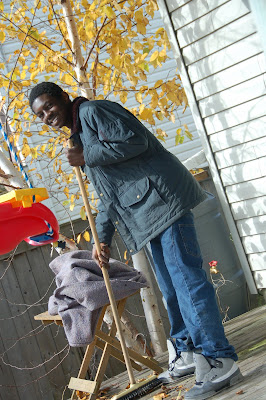 Our one and only pumpkin! 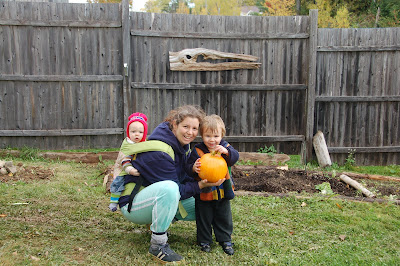 Brendan washing the rocks and our terracotta mushroom. It was weird packing up the garden with a view to moving next summer. We probably won;t be growing any veggies next year. 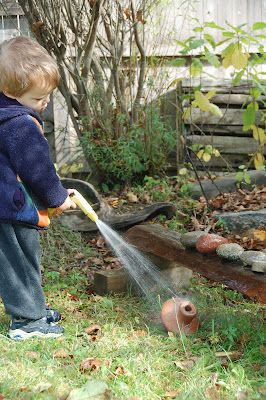 And a couple of pics from the park. 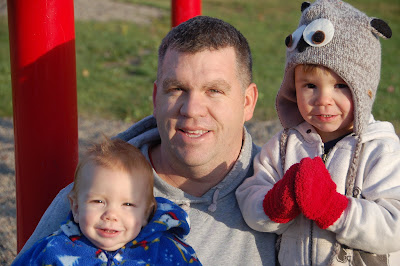 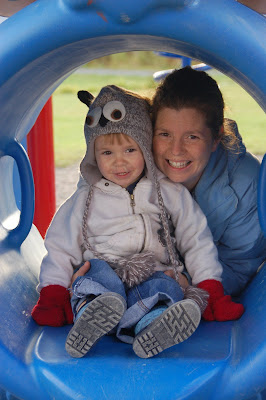