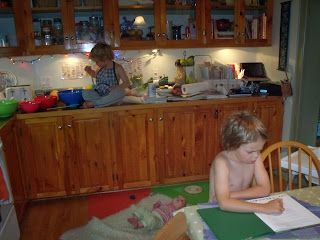 One last post before we head off on our trip. I thought I'd share this candid photo taken last week as it's a good snapshot showing some typical behaviours these days... a baby on the floor (though now she's already crawling and sitting up and even kneeling up by herself) a 4 year old on the bunker with his hands in the food and the food all over himself and a 6 year old reading. In this case a recipe for Rainforest cookies from a library book, but he's always reading. And drawing. And writing. Definitely a thinker.

We're all packed for Costa Rica. We've managed two rucksacks, each with some spare room and two small daypacks. Brendan also insisted on taking his own little bag so we'll see how that goes. All in all it's a little more than I was hoping to take but not too bad considering we now have three kiddos.

Off to bed. Taxi's coming at 4am!
Posted by siobhan No comments:

i'm wondering if this works- blogging from the phone.
Here is A being pushed in a swing for the first time. 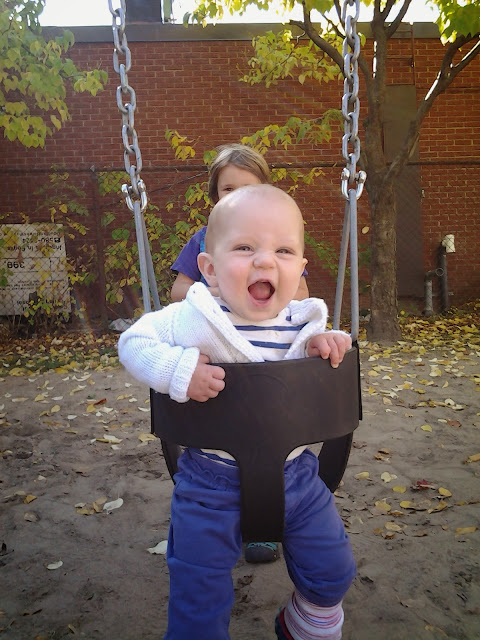 March March Triceratops
through the mighty woods,
When you see some plants to eat,
eat them all up.

You're a hungry hungry herbivore,
you eat and eat and eat.
If you see another one,
fight it with your horns.

Protect your herd from predators
every single day.
March March Triceratops
through the mighty woods.

Your day has past now,
go to sleep.
Posted by siobhan 1 comment:

We did very little exploring by car on PEI.
On one day we drove to the Greenwich dunes part of the National Park, did a couple of interpretation activities in the visitor centre and signed up for the explorers booklet, then did a short bike ride on a trail in the area. Pizza (all the boys) and lobster roll (mama) for lunch out and then went to the Dalvay area. The activities were a little easier than at Fundy National Park so the boys were able to complete the booklet and then  meet up with an interpreter to be "awarded" their explorer tags 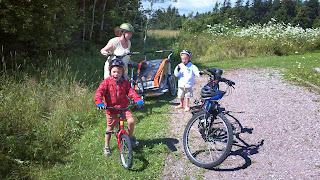 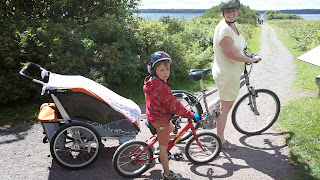 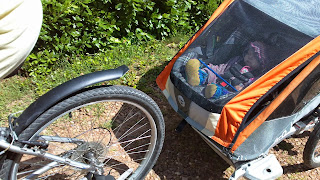 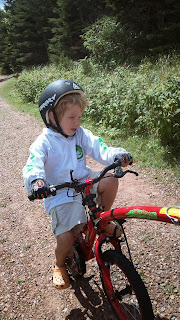 Another short trip on a different day took the boys out on a search to find Siobhan after she had walked as far as she could along the beach. Afterwards we went to the East Point Lighthouse and had a wander around and a snack lunch there. 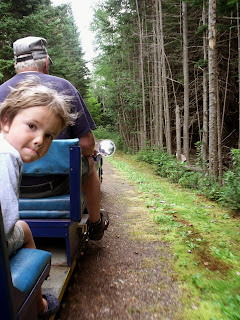 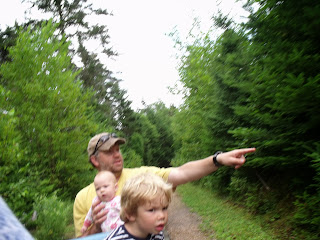 We went on this short train ride, counting wooden cut outs of animals as we went. Perfect for young kids. And joker fathers...


On yet another day we went to find the inlet at the other end of our lagoon. Here the boys found this eroding dune with great long roots hanging down and they "abseiled" and climbed to their hearts' content. 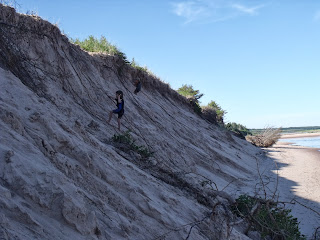 And just one final one of this sweetheart. So happy and easy going. 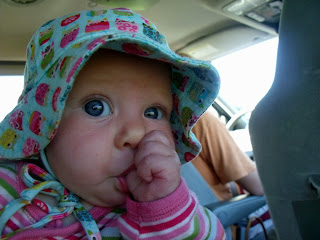 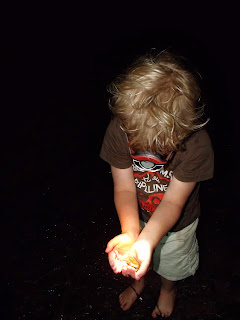 Tadhg was in his element! And from that day to this he's been saying he's a zoologist. We had not learned how to hold a crab yet (two fingers at widest part of their body) so he just went at it with no fear. He picked up many, many crabs, each one bigger than the last, then one managed to nip his finger and was thrown unceremoniously back in the water. Just a few seconds later though, he had caught his breath and carried on. A couple more nips, and a particularly nasty one that made him cry a tiny bit, he had a break for a few minutes but still went back to it, this time only catching the small ones.

At the National Park visitor centre the next day we read something about crabs and it dawned on me about holding them by the widest part- I wondered how I could have forgotten that as crabs were always around when I was a kid, until I remembered that we mostly just stabbed them with a sharp stick to watch their green and blue blood (I don't think we even ate them- how cruel is that?!) Anyway, there was no crab killing going on here, at least not on purpose. There were so many of them that a few did get stomped on and others were damaged a little by not so careful 4 year old hands (though he did try). 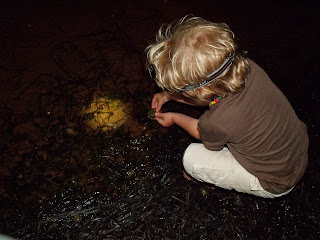 Brendan was all for helping spot them by torch, but less keen to pick them up. Later that week Brendan spotted a scuttling hermit crab and shouted for Tadhg.
B: "Tadhg, a hermit crab!"
T:  "Get it Brendan!"
B:  "Quick, it's getting away Tadhg!"
(Tadhg coming over)
T:  "Well pick it up!"
B:  "No, you pick it up. You're the zoologist!" 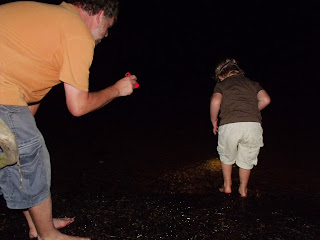 
On this evening we stayed on the beach late for a fire, and by the time we were heading back there was a large and angry storm approaching. No photos were taken, but I'll never forget the feeling in the atmosphere, the light surrounding us, the flashes of lightning getting closer every minute, the calm before the storm and then the wind picking up, the energy and excitement in the boat between us as we took it all in, Steve trying to row quickly and the boys straining their eyes and yelling orders to help him avoid the oyster farm floats (though we did hit one!) It was a real adventure and I was totally thrilled, not only in myself but for the boys as well- I'm sure that experience went deep inside their souls and just added something special to their whole existence.
The next day I walked along the deserted beach for a few miles, with Araliya nestled against my chest in a carrier, and I pondered the relationship we humans have with the coast. I tried to imagine the very first people who walked along this stretch and what they must have been feeling or thinking. I wondered if there had been a woman among those early explorers, perhaps carrying a tiny baby as well. How did she carry and care for her babies? What challenges did she face each day/year? What made her laugh and cry? Impossible, I know, but it was a fun thought experiment. Whatever her challenges, she didn't have the ability to call her husband on a cell phone and ask him to come pick her up at the end of the road when she couldn't cross the jellyfish infested tidal estuary!
That spot was definitely a highlight of our year. Unforgettable. 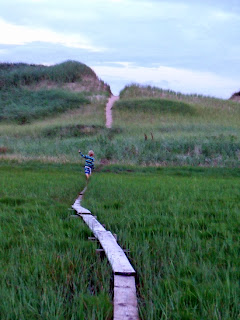 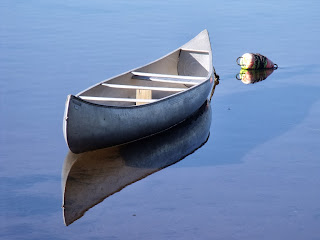 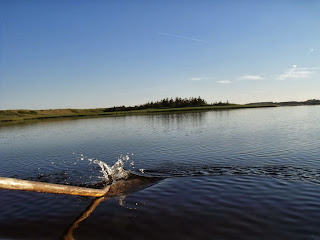 This was the morning after we began seeing the first of the Perseid meteors. The following week was filled with stargazing and meteor spotting on our own and with two sets of friends, plus three sightings of the International Space Station as it passed overhead, including one good binocular view showing the H shape quite clearly. The holiday in general was a good one for sky watching. In New Hampshire (in case I forget to mention in later) Brendan and Siobhan had lots of late night trips to the river beach to try to learn some of the constellations. I loved this as it holds a major spot in my memories of childhood, time spent listening to my dad tell stories of Greek gods and goddesses, a trip into the desert to see a comet, a lunar eclipse from my bedroom window. Brendan is fascinated and just last week on our regular Friday visit to the library his question for the librarian was for a book about the constellations. He has been drawing them out and sticking them on his pin board. It won't be long before he knows more than me!
Posted by siobhan No comments: