We're just back from a week away in Scotland. I'll point out some of the highlights with the photos below but I kept forgetting the camera in the caravan or leaving it at Caitlin's so there were more.

So here's a quick run down of what we got up to.

Ferry from Rotterdam to Hull- a great way to go. Cuts out on hours of driving and you can get a good nights' sleep on the boat.
We stopped at Nik and Fi's on the way up and spent a lovely afternoon in the park, eating pizza out and then did a wee bit of guising (or trick or treating). Here are all the cousins dressed up. 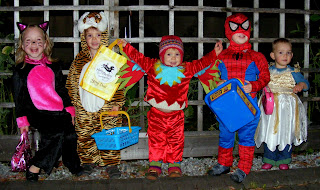 From left to right: Niamh, Brendan, Tadhg, Aedan and Eilidh.

They went to three houses, including Niamh, Aedan and Eilidh's granny's house and sang twinkle twinkle little star, incy wincy spider and some Bob the Builder to earn their sweeties. So much fun to look forward to as these guys grow up :)

We helped Uncle Phil out with some Busking for Cancer Research. Lots of fun standing out in the (bitterly cold) lane. Tadhg and Brendan ran around and played. Most people just averted their eyes and shuffled by but a few kind souls were quite generous. 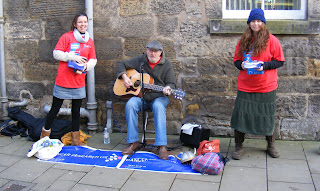 Steve and Brendan had a morning to themselves in Dundee while Tadhg and I went to St. Andrews to hit the charity shops. The boys went to the Discovery (below) and swimming at the big pool. 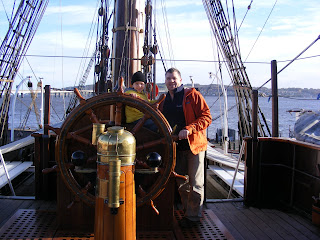 Most days we set out from the caravan park in a different direction for a walk. Brendan loved the bmx track with this balance bike.

We went to Kinshaldy beach one day, with Paddy, Tasha and Cash. Tasha, Tadhg and I lingered at the new wooden obstacle course type playground while the others headed over the sand dunes for the beach. When we caught up with them ten minutes later, Brendan was half naked and Steve had his jeans rolled up and they were splashing in the sea.
The North Sea.
In November.
And Tadhg wanted to join the fun.
Oh well, the sun was shining and it was a beautiful day. Kids are made of tough stuff! 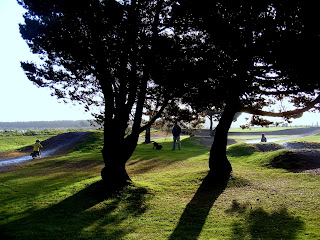 We played here (below) a couple of times- the point where a wee stream meets the estuary. Steve got stuck in a built a dam, Cash spent half an hour trying to free a giant tree branch from the under some giant rocks, Tadhg threw stones and Brendan and I played with our shadows.
One of many memories of Tayport that always stands out for me is walking the dog on the common and going down by the river/sea and watching and hearing the birds. A new information board by the caravan park tells us that the Tay estuary has the largest winter gathering of birds in Scotland. I love it! 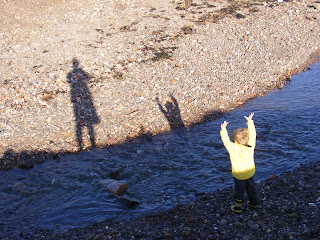 On Bonfire Night we joined Kath, Lee, Ella and new baby Isobel and went to one of the big bonfire and fireworks parties in Dundee. The fireworks were pretty spectacular but I didn't see a lot as Tadhg was not at all impressed with the noise so he and I speed walked straight back to the car.
It was lovely to hang out with the Cowies and meet Isobel. Brendan, Tadhg and Ella watched a WHOLE movie after the fireworks so we were able to eat a yummy Indian takeaway. We're hoping they'll come over next year and either stay for a bit of meet us in France somewhere. 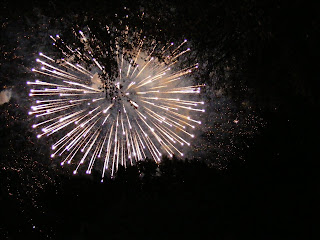 One of the top highlights of the week, also not caught on camera, was a whole night out for Steve and me. Caitlin and Billy moved in to the caravan to watch the boys while Steve and I went out for a very special and very delicious dinner in the Thai Restaurant we had seen on the telly recently, Nahm Jim. As we walked around St. Andrews building up an appetite for dinner we popped in to a B&B to check out the rates. The owner offered us his last room for two thirds of the normal rate so we went for it. A wonderful meal, a walk around town and a proper night's sleep. We were still wide awake by 7 in the morning though, no matter how much I had dreamed about sleeping in! Super breakfast, with haggis of course, and then we went off for some more walking and a dose of nostalgia for me. I bumped into an old teacher in the street and then went by my old school and had a lovely catch up with my physics and chemistry teachers who are still there.

On the way back to the ferry we stopped in to see Michael, Glynis, Eimear, Naomi and baby Michael. We only had a couple of hours but it was wonderful to see them.
All in all a fairly good week and we do feel as though we caught up on some sleep and are a bit more rested. The last few months since we moved here have been a little tiring as we try to find our feet.
Posted by siobhan 1 comment: