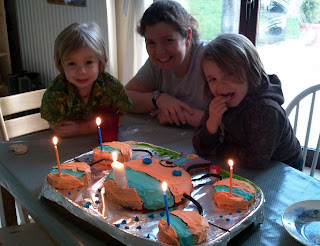 It certainly doesn't seem like five years since Brendan was born- at least not when I'm thinking about his birth and those precious first few days. I remember that all so clearly, of course. But some other periods since then are a little more hazy- sleep deprivation and all that :) But all in all it has been the most amazing five years and watching him grow and change has been such a joy. I really should write more on here about how they are growing up day to day. His creativity is just blowing me away at the moment. And how gentle and caring he is (though not always when it comes to disagreements with his brother) and his curiosity about so many things that interest him ("tell me more mummy") and the way he sometimes loves to stay at home all day and move between drawing, writing, lego building, riding his scooter around the house, dictating stories for me to write, reading "about the world" with the occasional trip outside to check for eggs or water his spinach. This boy is soooo cool. 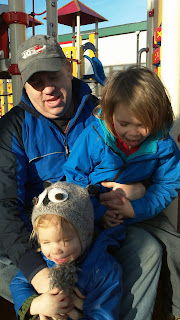 The boys and their Daddy killing time at the park before going to see a movie. Turned out the movie wasn't on after all so we went bowling for the first time instead. They had a good time but both lost interest before the game was over, which Steve and I were a bit miffed about as we were enjoying the competition. (I would have won!) 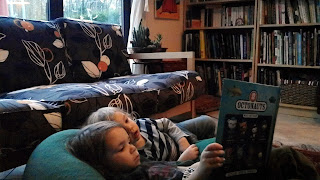 Here's the birthday boy "reading" about the Octonauts to his wee brother while I put the finishing touches on the Octopod cake.

For those who don't know, the Octopod is home to the Octonauts, a team of characters who Explore! Rescue! and Protect! the ocean and its creatures. It's an animated TV adaptation of the Japanese storybooks. There is a caring penguin medic, a polar bear captain, an adventurous pirate cat, a geeky sea-otter scientist, a chilled out and clever bunny engineer, a smart grandfatherly octopus professor and... I think I'm missing someone. Brendan to the rescue- I forgot the photographer- a dog. Oh, and the weird half-tuna-half-cabbage characters who grow the food and cook. Wikipedia says the "subject matter is reminiscent of a blend of Star Trek and Jacques Cousteau" - right up my street! But the creatures they meet are real marine animals so we learn something interesting from each episode. I like it a lot, although having seen each of the 50 or so episodes at least 5 times each means I'll be ready to move on to the next obsession when it reveals itself. 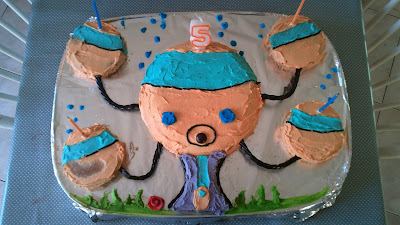 So here's the cake. He was very happy with it, despite the absence of the characters. Thankfully he didn't notice that until we had eaten half of it. Belle the Cat claimed the bottom left pod as her own by licking off the icing when we weren't looking.

a wet week in the west 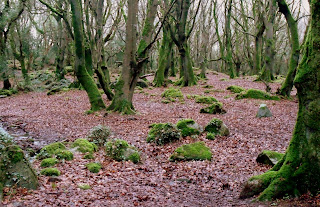 A walk in the woods just west of Galway City. 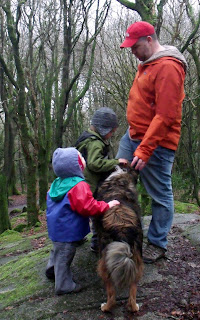 We were joined on our walk by a lovely dog who didn't appear to have an owner nearby. He walked with us for quite a while and the boys loved it- I think it was a highlight of the trip because they continued to talk about it for ages. 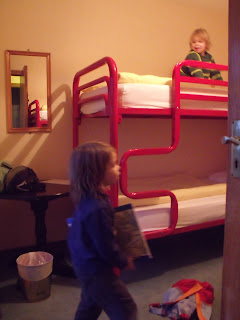 We spent the first two nights in a hotel in the city before moving to this hostel (above) in Clifden for a night and then back to Galway for a night in another hostel. The first hotel had an awesome breakfast but not much else going for it. The hostels weren't busy and we got a four bed room to ourselves in each one. The only other guests in the hostel in Clifden were five sedate young French people who may have been saving up their energy (and money) for a big night out on New Year's Eve. In Galway we stayed in a city centre hostel so that we could easily walk to the theatre for a pantomime on the last night. Which totally rocked! The boys (all of them) got right into the interactive side of it and yelled and booed at the stage. Will have to take them to more things like that. 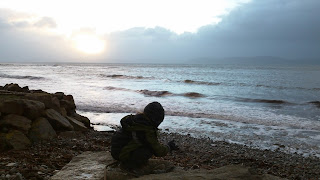 We drove around quite a bit, checking out the coast and dreaming about buying a house in Connemara. The rain did stop now and then, for a few minutes at a time, but the rain didn't stop us getting out for a few walks. We stopped at the wee beach above to watch a pair of surfers hit the waves before the sun had even risen. 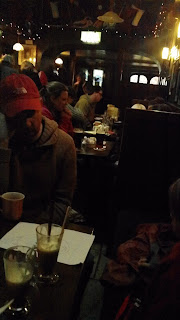 We stopped in a few pubs for lunch or supper or just hot chocolate. Each time Brendan would get out his Octonauts annual and drawing stuff. We also had a couple of nice restaurant meals in Galway. 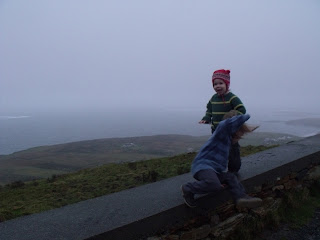 As the boys ran about at this viewpoint a farmer drove up to check on his cattle. I asked him if he could suggest a beach where the boys could run around a bit. The conversation went something like this...

Now, I don't know why but I thought we were still working out driving directions and started picturing a "biggest whale" like the "biggest axe" or "biggest moose" kind of thing you might find in North America. We carried on...

So off we went in search of a 45 foot beached whale. We made sure to tell the boys that the whale was dead long before we got to it. The beach was on Omey Island, a tidal island which was only accessible for a few hours either side of the low tide. We had to wait a few hours and then parked on the mainland, walked across a lovely stretch of sand and along the single narrow road across the island, over a gate, through a field and down the rocks to the beach. Despite the rain there were quite a lot of people out walking on the island and we made a note to come back and visit when the weather is better. 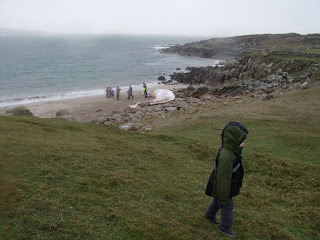 It was both sad and awe inspiring at the same time. I thought it looked like a sperm whale but wasn't confident. I asked some others but noone knew. Later that day I read in the paper that it was as a 45 ft male sperm whale that may have been 60 years old. He had died at sea and washed up on Omey Island 2 days before we were there. Sperm whales are toothed whales and Brendan informed us that they eat giant squid in the "midnight zone" (what the Octonauts call the dark depths of the ocean). 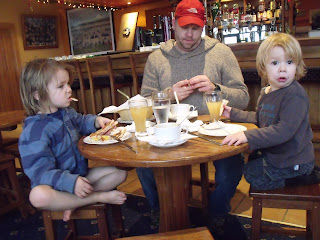 After the walk we were all completely soaking and headed to the nearest pub for soup and sandwiches.

On another day, Steve took the boys to the boys to the spot where Alcock and Brown landed after their successful attempt at the first non-stop transatlantic flight. I was a lucky woman and got to look around the shops and buy brightly coloured wool socks. 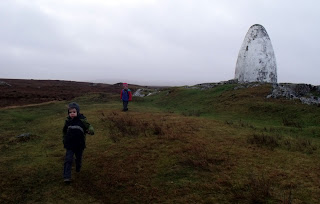 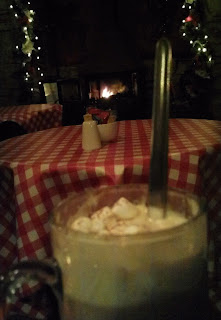