Well here we are enjoying life in Norway. Caitlin and Billy where gracious enough to come and watch the boys so Siobhan and I could get away for a short break.

First stop on the agenda was Hafjell, one of the ski resorts north of Lillehammer where a few of the '94 Olympic events took place. When we arrived, Siobhan decided that a quick 3hr nap was in order while I went and did some skiing.


On day two, we got 5 hours of skiing in. This is a picture on the t-bar as we head for the top and the best run on the mountain.

Overall, the weather was warm enough to ski without gloves or a hat by mid-day but that meant the slopes became fairly slushy.

Siobhan editing to add a bit...
The view from the top was spirit lifting, of course, and very different from the Alps. These mountains are quite a lot older so not nearly as dramatic and rugged, but that meant we could see a fair distance. I love being above the tree line, and was dreaming of long distance walking again. We'll have to get round to it one of these days.

At one point, while on the uppermost chairlift, we spotted a large flock of birds approaching from the south and to the east, heading north. We are at 61° here so not that far from the Arctic Circle (as the crow flies), and actually, now that I think about it, this is the furthest north I have ever been. I've often wondered how on earth birds can fly such great distances, and I guess the point is that they are not "on earth". The most incredible thing yesterday was seeing just how quickly they travel. We took our eyes off them as we got off the chairlift, and moments later they were so far off to the north we were just flabbergasted.

If anyone is interested... we were trying to work out what 5° latitude (from here to the Arctic Circle) looks like on the ground, using wildly inaccurate guesses about the circumference of the earth. Anyway, we were close but not that close- so in the interests of noting accurate information, here is a sentence copied from wikipedia...  "the meridian length of 1 degree of latitude on the sphere is 111.2 km or 69 miles." Oh, and the circumference of the earth is about 40,000 km or a little less than 25,000 miles. A bit smaller round the poles. So there you go. We're not that far from the Arctic circle.

Back to Steve...
After we finished on the slopes, we quickly drove to the opposite side of the valley to have a go on the Olympic bob sled run as passengers in the bob-raft, a square padded sled which actually looked like a blue porta-potty on its side. Nonetheless, it was an excellent opportunity to see what it's like to do the bobsled run. We'll now watch his event on the telly in a different light.

As for the kids back home, although I do miss them, and it would be nice for them to ski, it sounds like they are having a wonderful time with their Auntie Caitlin and Uncle Billy.
Posted by siobhan No comments:

...after not really being on it at all, ever. 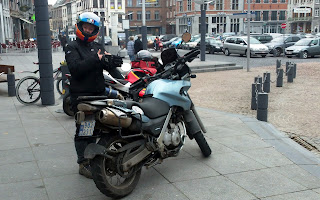 In my own mind I'm now allowed to call myself a biker. I can even take my hand off the handle bar to wave at fellow bikers I pass... woo hoo!!
I can now get the motorcycle out of the garage and set off on my own, cope with busy traffic and have even proven myself capable of surviving a busy motorway- the test was sprung on me, accidentally, by a navigationally challenged Steve who took a wrong turn and ended up on the motorway sliproad.

Looking forward to lots of motorcycling adventures to come. And one day, maybe, a long, slow trip, with boys and sidecar?!? Here's hoping :)
Posted by siobhan No comments: 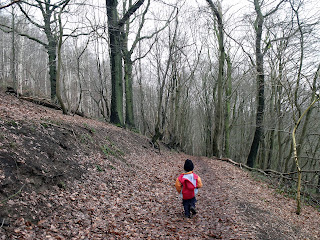 Every weekend there are a number of marked out walks we can choose from around Belgium. Here's one a couple of weeks' ago, near Charleroi I think. Some of them, particularly ones around Mons and other parts of Hainaut, include a bit of up and down around the old coal mines. I posted about a "terril" near our house a while ago, and we were talking about this the other day... how these ugly heaps were really disappointing when we were new here, just one other depressing aspect of the Belgian landscape. But now, only 18 months later, we actually love that spot and really appreciate it. Anyway, back to this walk... 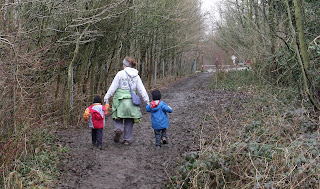 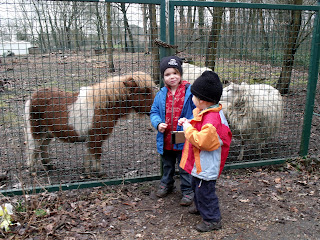 We met a "teeny tiny" pony. 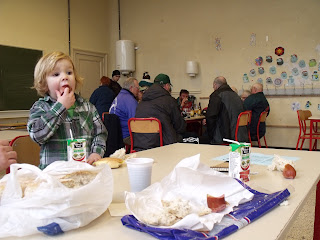 There is always a checkpoint somewhere on the route where you can get your logbook stamped and have a snack, or a beer, of course. The group of walkers behind Tadhg were certainly getting through the beers at 11 in the morning! 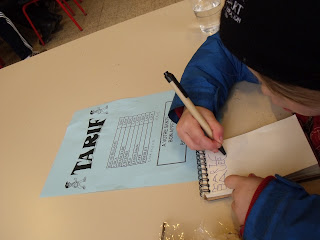 Here's Brendan copying the menu into the notebook he won at the fundraising tombola at the start point. Of the hundred or so prizes, most of which were complete junk, Brendan won a lovely recycled notebook with attached pen made out of recycled water bottles. Perfect! He was very chuffed and carried it around for a couple of days, taking every opportunity to write in it, no matter the location. 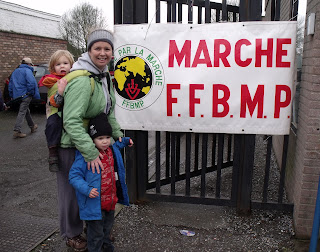 Here we are at the end of the walk. It was just over 6k in total and Tadhg managed over half I think- we've adopted a concept a friend wrote about on her blog, namely that a child can aim to walk about half their age in hours. So we aim for 1.5 hours of walking for Tadhg, and 2.5 hours for Brendan. That's pushing it a bit for Tadhg, so our carriers are still getting lots of use. Brendan only had a couple of short rides on Steve's shoulders up the steeper inclines, but he pretty much did the whole thing. 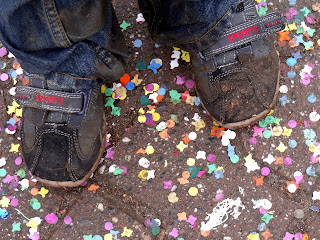 This was the day after the Carnaval celebrations- muddy shoes and colourful confetti all around.
Posted by siobhan No comments:


Brendan and Siobhan joined a frog and toad protection team! Here's Brendan standing beside the sign just outside our house as we headed out on an amphibian rescue mission. 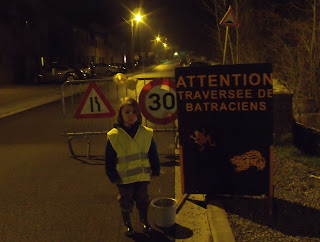 Each year in the spring, frogs and toads travel down off the hill at the end of our street, across a busy road, through gardens, across a farm road and finally reach a little pond in the woods where they spawn before heading back up the hill. Ordinarily many of them are killed on the road, so a team of volunteers, lead by a lovely lady called Katia who works for the local council, walks up and down the road for a couple of hours after sunset to help them across safely. 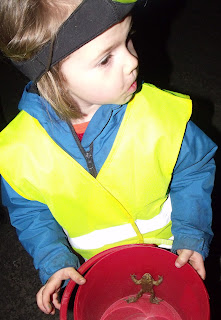 We were asked to come along by our local friends who have done this a few years running. We had to wear a safety vest and bring a torch and a bucket. As we walked along we could hear movement in the bushes but, given Brendan's inability to stay quiet for more than about 2 seconds, they were a bit hard to find at the beginning. Once we had a few gathered, Katia showed us where to go to realease them. 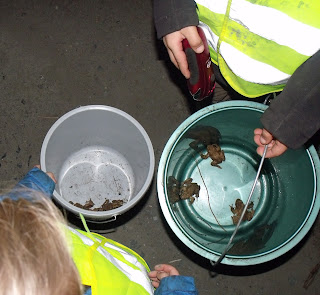 Between the four of us, two kids and two parents, we found 12 and then another two on the way home which we just helped across the road. Katia was counting and the total for the evening was over 80 individuals and 20 pairs, mostly toads and some frogs. That's 120 frogs and toads helped across the road in under two hours.

Those already paired up were all toads- each a large female, fat with eggs, with a much smaller male clinging onto her back. We were told to try and keep them together. She showed us how the male will kick out and shout at you if you touch him, thinking that your hand is a rival. 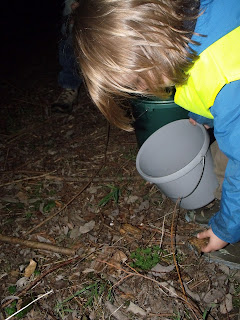 Here's Brendan releasing some on the far side of the farm road, leaving them to cover the last 30 yards or so on their own again. This was a lovely moment, but all in all it was an experience with mixed emotions, for me at least. We talked a bit about how humans disturb natural migrations like this but we mostly focussed on the good- how cool it is to save a frog from being squashed! 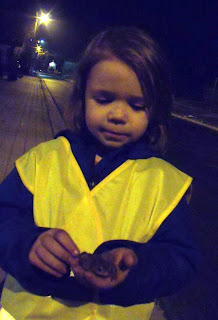 We can't go tomorrow because we have friends coming over in the evening but we may go on Sunday night. Katia said she'll bring some info leaflets- about the migration and how to tell the frogs from the toads and the females from the males. And apparently if it rains during the day the numbers should be bigger. So we're hoping for some rain on Sunday, but not too much!
Posted by siobhan No comments:


While Tadhg and I were in the bath, baking cakes and cookies with imaginary ingredients and kitchen equipment, Brendan concentrated hard on building the Tintin ship the "Unicorn" out of lego. They have seen the movie (whether or not that was wise is a topic for another day) and Brendan had decided he wanted to act it out.

He asked Tadhg and I to do a show with him. "Actually, mum, it's really a play but I'm going to call it a show."

We spent a good few minutes trying to convince Tadhg to defer to Brendan in the role of director, this being very hard for Tadhg to do as he has a pretty strong idea of how things should be done.

B pleaded, "Can you be the artist and paint a picture of me, I mean tintin, I mean me, I'll sit here, please Tadhg, please..."


Once T understood, he said "oh, ok" and 'painted' a picture of Tintin in about 2 seconds flat. Brendan and I had just about given up when Tadhg seemed to 'get it' and embraced the part. I then sat in another corner of the room and watched the two of them perform the painting scene, Tadhg totally milking it and managing to stretch the scene out to about 4 minutes long. He improvised some small talk and Brendan played along. It was so awesome to watch. Hopefully I'll get a bit on video tomorrow. 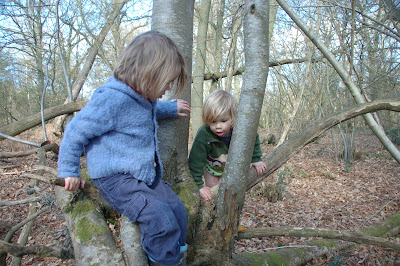 
Today, in the car, Brendan started making up nonsense poems, along the lines of

no no bum bum
yum yo tum tum

me me see me
dim dum bumble bee

me me me see
see me pee pee

(Why muck? I have no idea- this was spontaneous, no thought at all, anyway, it goes on...)

Well... I learned a couple of days ago not to react to this kind of thing. The other day when Tadhg snatched something, Brendan said "Tadhg, you're a little shit!" and I (rookie mistake, as Steve would say) reacted with an intake of breath or something similarly innocuous and that was it, he repeated the word 'shit' about a hundred times that day.