Day Two on the Isle of Mull

Well, here we are on day two of our adventure and life is great. This was one of the first views we came to on our way towards the South-East. 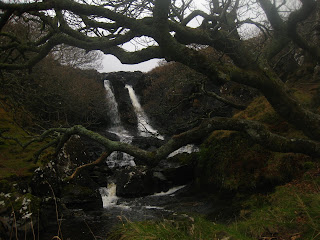 While en route, we where getting pretty desperate for fuel.The petrol station in Salen was closed and the pumps in Craignure where broken. Regardless, we still had just enough fuel to get a few stops in before heading North for fuel. The first stop was at a Mausoleum for the late MGen Lachlan MacQuarrie, the father of Australia (1761-1824). I just wanted to highlight the dates. History is amazing. 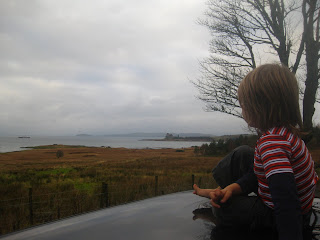 This is Brendan on top of the rental car having a look at the ferry boat and the castle which we are heading towards. 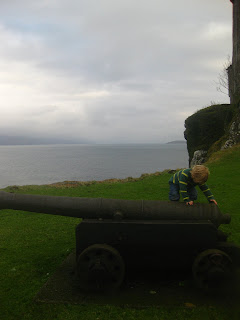 The MacLean's of Duart Castle was closd for the season but we still had fun walking outside it. I think this is Tadhg trying to figure out where the powder and flint goes. I didn't know Paul came from money $$$$$. 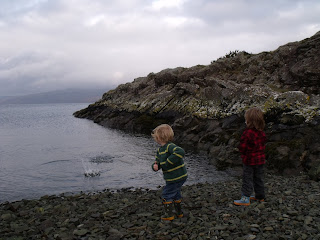 There was a nice little path which went down to the shoreline from the castle and as usual... the boys, a bunch of rocks and water.... heaven! 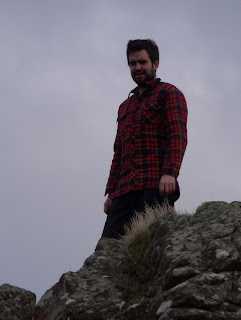 Thanks Paddy for all the help. Yet again you've spoiled Brendan and Tadhg with love and attention. After the castle, we stopped in at the Craignure Hotel to have a swim. It was a great little pool except for the fact that the chlorine levels were way too high. And warning for Siobhan, Tadhg is even more fearless when it comes to water (FYI). 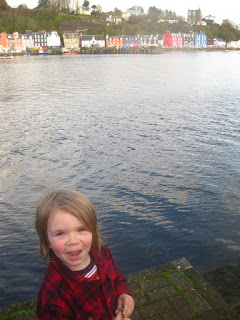 We headed back to Tobermory for petrol and a nice pub lunch. The sun was out and the waterfront was bursting with colour compared to yesterday. 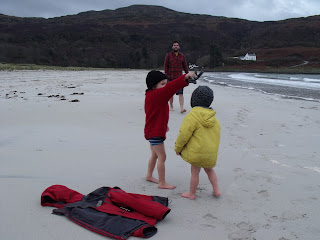 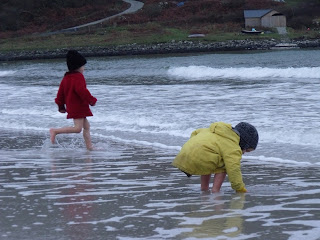 Once we where done with Tobermory, we head back towards home and stopped off at Calgary beach. Not my fault. The boys wanted to run in the water and there was nothing I could do. Honest! Oh well, at least we all fun getting wet.

This is the boys and I on our way back to the car to get warmed up and head home for the night.

And finally, here's Tadhg playing in one of the box beds in the living room while I cooked up a cottage pie for supper.

As a last note, some of the wildlife we came across during our travels on the Isle of Mull where; cows, sheep, an owl hovering along side the car as we drove, a sheep dog in the middle of nowhere looking for its herd, an eagle, falcons, cranes, rabbits, a mouse, a nice stag, a baby doe, oh and the prize... we saw a falcon lift of with a field mouse or something in its talons.
Posted by siobhan No comments:

Adventures on the Isle of Mull

With Siobhan on a Doula course in Edinburgh and nothing better to do, the boys and I rounded up Uncle Paddy and headed off for the Inner Hebrides for a weekend of fun and adventure.

So here we are, Siobhan is on course in the big city and Tadhg, Brendan, Paddy and myself are on the beautiful Isle of Mull. 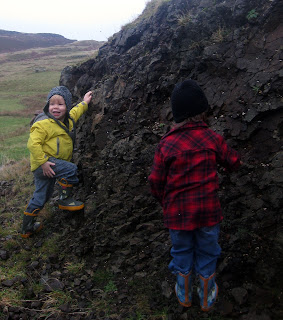 Determined to have a quick start to our Saturday, we got the boys fed, dressed and out for our first walk. Before we even started to head out towards the Treshnish Headland, the boys already began bouldering on this small outcrop. 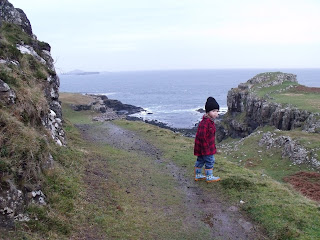 After exploring along an old stone dry wall, Brendan was the 'expedition leader' as he likes to put it. Leading the way and checking the path for dangers.

Here we are on the headland looking for a way down. 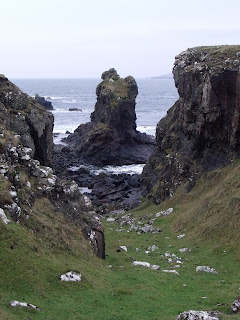 Finally we found this path which opened up towards the raise beach. 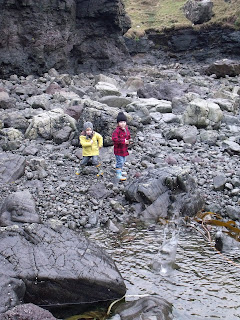 Once we were down by the water, the boys were in their element, yet again.....throwing rocks into the water. 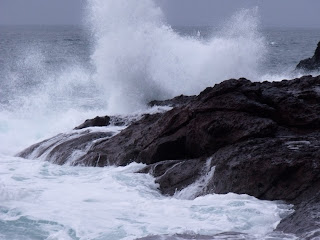 At one point the ways got a little bit bigger and the tide start to move in. It's amazing how Brendan is very aware of tides and very cautious about it. I think he has watched a bit too much Fireman Sam. 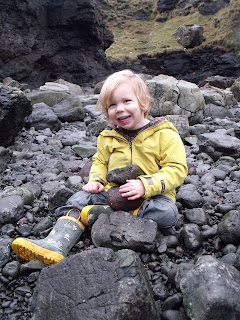 As for Tadhg, he's hilarious. He just decided to plop his butt down on the ground in order for him to pile rocks in his lap, mumbling to himself and singing as he did it 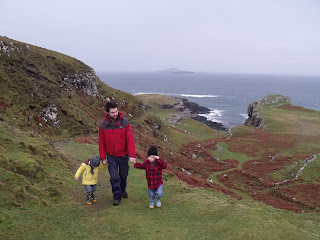 On the way back up to the car, I mentioned to Brendan that the Isle of Mull was made from volcanic activity a long time ago. This obviously sparked Brendan’s curiosity and the 100+ follow-on questions about 'volcanoes, lava, is it dangerous, will the houses fall, etc…' This is Paddy continuing the conversation using a balloon as an analogy. We think it satisfied his curiosity. Oh, and once Brendan was done, Tadhg decided to start asking question as well about volcanoes. 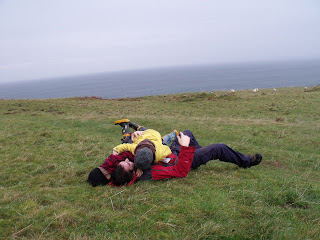 Not sure how this happened but I turned around and Paddy was on the ground with the boys piling up on him. I guess it was dog-pile on Paddy time. 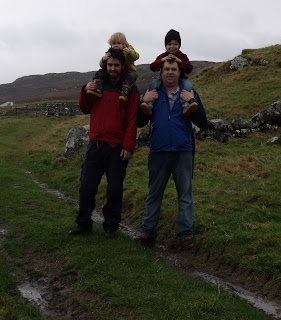 After our walk, we got in the car and head for Tobermory. It is were they filmed the children's T.V. show Balamory. Although Brendan wasn't very interested at first, Tadhg keep going on about it. 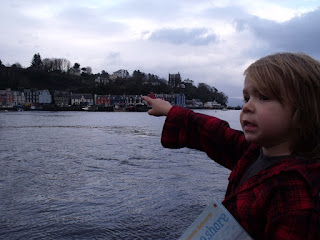 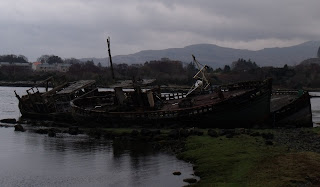 Before the sun went down, we headed off to Ardtun in order to check out the fossilized leaves but between the strong wind, sideways rain and two cold children, we only made it 3/4 of the way.

We came across these old boats on our way back to Tobermory where we had a nice but quick dinner in a pub (mac-&-cheese for the boys and fish-n-chips for us) before we saw..... TINTIN. Yup, all four of us went to see it in the Screen Machine, a mobile theater which provides cinema service to the remote Highlands and Islands of Scotland. Apart from having to go out for 5 bathroom breaks, Tadhg even enjoyed the movie and was well behaved.

Hope you're having fun on course Mummy...... See you soon.

With the festive season quickly approaching, we attended our first Christmas Market of the year on base at SHAPE. Siobhan had a chance to start our gift shopping at the annual Canadian Christmas Market 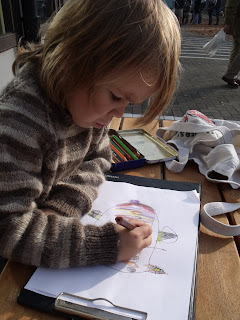 This is a picture of Brendan colouring in his airplane while waiting for a late morning snack. Lately, Brendan has become very creative when it comes to arts and crafts. As for our snack, we had poutine. Yup, you read correctly, they had a local 'frite trailer' at the market selling a good old fashion Quebec Poutine (albeit a mediocre attempt). None the less, it was a nice reminder of Canada.
After the Market, we went to a co-workers house for a wonder BBQ. 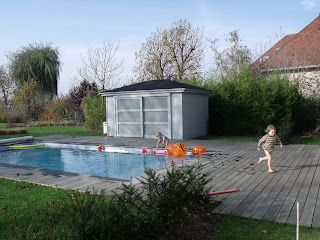 Before Eduardo had a chance to say hello to the boys, Brendan & Tadhg both had their clothes off and were enjoying playing by the pool. 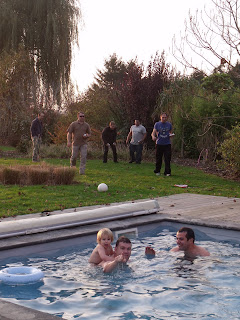 By the end of the day, Tadhg was determined to get in the pool and have a splash around. Even Eduardo joined in. Although I don't care for flying an imitation mahogany desk (as mentioned in a previous blog), one thing I do love about my job is the international environment. In the picture about, there is a Slovakian, American, Portuguese,  Latvian and Greek... all of whom I get to work with every day. 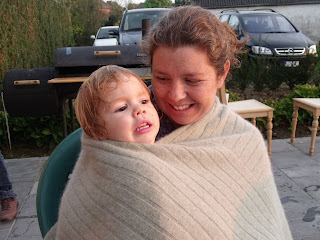 I don't think Siobhan was very impressed with 'me' allowing Tadhg to go for a cool dip in the pool. On a positive note, at least she got a nice long cuddle with her little man in an attempt to warm him up.
And, on orders from the wife, she wanted to set the record straight. These pictures were taken in November in Belgium, not the Seychelles, where the daily high was about 10 degrees Celsius. Silly husband!!!!


Posted by siobhan No comments:

One of the things we love is how our furry friends always try to join in the fun. So far, the two of them (the pets) have been very tolerant with Brendan & Tadhg's constant antics of hugging and chasing. 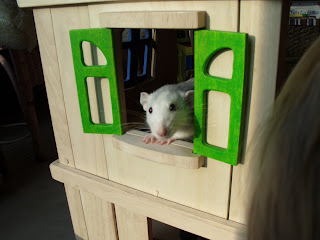 Here's a picture of Coucou in her three story wooden condo. Don't worry. Belle is usually outside when Coucou is out and about. 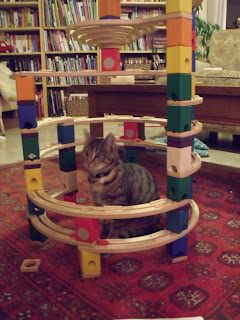 And this is Belle in the middle of Brendan's marble run waiting for a marble, or ten, to make their way down the track. It is hilarious the way she can swat the marbles off the track gently enough without knocking it down. Oh, by the way, we think Belle is pregnant. Anyone want a kitten???