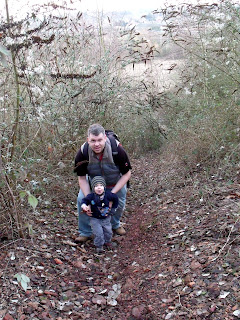 We went out for a sunset walk the other day. The sky was a beautiful colour and the air was still so we headed for the nearest bit of high ground to get a good view. We didn't quite make it though :) Typical for us we were a bit slow getting out the door so we missed the sun going down but were still rewarded with a lovely sky and an abundance of aeroplanes for us to count. You can't tell from the photo above but this is a very steep scramble of a climb and Tadhg managed to go the whole way with just the odd helping push here and there. 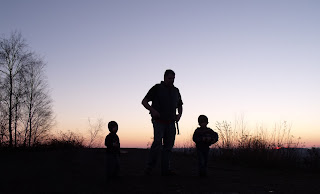 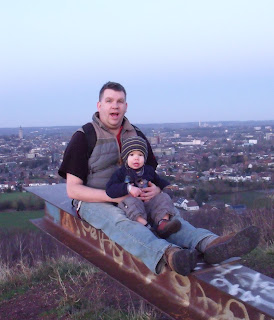 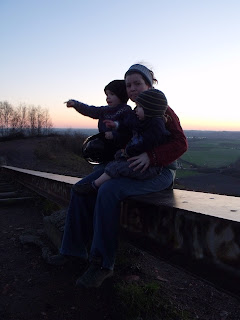 We've had a bit of a topsy turvy time recently. I've written about this elsewhere and spoken to many people in depth but I just want to briefly write about it here. Edited to add... not so "brief" as it turns out :)

On the 3rd of December I took myself to the local hospital here in Mons and boldly told the chief gynaecologist that I thought I had an ectopic pregnancy. I had been feeling really down for several weeks, with horrible nausea, shakes and a general feeling that I wasn't "myself." I had flipped out a couple of times. I'd also had intermittent abdominal pain for two weeks, sometimes totally debilitating. I had been to the doctor three times and had been referred to a social worker for counselling and had seen him twice. Pregnancy crossed my mind a couple of times, but I discounted it because I had done five pregnancy tests at home, all of them negative, and then I had had two periods. Or so I thought.

On a Thursday evening as the boys were in the bath, I thought I'd use the wonders of google to do a bit more research on ectopic pregnancy. The idea kept coming back to me and I constantly felt as if something terrible was about to happen, like I was a ticking bomb and the clock had quickened its speed. I found a source that said a negative test was possible (for a while). I found a list of symptoms, mentally ticked every one of them off and then dug around in the back of the bathroom for a left over pregnancy test in a three pack I'd bought two months before. Usually when I do a test I feel that weird sensation of being excited while at the same time trying to suppress it, kind of giggly. This time I just tried not to think about anything and got the boys out of the bath while I waited for the result.

Positive. I was devastated because I knew it was a pregnancy that wouldn't end with a baby. But at the same time it explained everything and I suddenly realised I didn't have a serious psychological problem after all. I phoned Steve and asked if he could come home early (he was supposed to be working late). Then I phoned a friend and asked if she'd come and watch the boys. Then I packed a little bag which, when Steve asked, I said was just in case I had to stay in, but really I secretly knew what was about to happen.

About an hour later the doctor was looking at a huge ovarian cyst with ultrasound. He said that would explain the pain. There was no sign of pregnancy and he said it may just be so early that nothing can be seen. He admitted me and said we'd sort out the cyst the following day. So I said goodnight to Steve and spent a long, lonely night, daring to hope that the pregnancy was alright and that all those crazy symptoms could be explained by a large cyst alone.

In the morning I went for a CT scan and shortly after I returned to my room all hell broke loose. The same gynaecologist (on a 24 hr shift) and an interpreter arrived and said I was going for emergency surgery. They had confirmed the cyst and had found "a pregnancy" in my abdomen along with a lot of blood. I rather stupidly asked him if they really had to take it all out. I phoned Steve quickly and told him not to come because he wouldn't be able to do anything anyway (he did come immediately though of course, and couldn't do anything but go away again). Then I just let the nurses get on with prepping me while I quietly sobbed for the baby and rubbed my belly and told it I was sorry and that I loved it and that these things happen. I also thought about my boys, especially when the anesthetist spoke to me in french and I thought, crap, what if I just don't wake up from this? But then I thought I'd better think positive thoughts, quick!

When I woke up I was sad but the overwhelming feeling on the first day was relief. Relieved that I was alive and that I now had an explanation for what had been going on in the previous weeks. It had been such a scary time, knowing something was terribly wrong but not knowing what. I also felt hopeful that I could get back to being myself, especially for Steve and the boys. It had been heartbreaking and a terrible source of guilt that I hadn't been behaving normally and being there for them as I should. I now understood why I hadn't been able to cope with daily life, and why I had nearly crashed the car as I drove home one day from the doctor, not realising that I was in shock due to internal bleeding. I also felt an understanding and appreciation for the real, genuine job of the obstetrician, which includes saving lives (but not performing unnecessary C-sections) and I was somewhat in awe of my particular doctor. I knew that 1 in 300 pregnancies are ectopic and I felt for all other women who've had a similar experience. I thought about my own mortality, knowing I could have died had I been born in any number of different times or places. I thought of all the women who die of this in different parts of the world, today, because they can't be saved by a genius doctor doing a fairly straight forward operation. And I thought of all the living children left by those lost mothers... The list goes on...

The loss of the baby hit fairly hard, especially on day three when my hormones did whatever it is they do on day three. I started leaking milk and heard a few babies cry out in the corridors. A wonderful night nurse who spoke not a word of English sat with me and held my hand a few times.

The boys came in every day. Brendan had hundreds of questions and Tadhg liked playing with the bed buttons and using the IV stand as a skateboard (not mine-ouch- but the unused one by the neighbouring bed). It was lovely to see them, but about ten minutes at a time was enough! I had lost a lot of blood and was totally exhausted. The pain was only strong for a couple of days, after which the only painful thing was having the abdominal drain changed and then removed. OuuuuCH!

It wasn't until three days after the operation that I got a full understanding of what had happened. I had been as pregnant as I had guessed, 13 weeks and 5 days. I had lost my right fallopian tube. "The pregnancy" had attached to my bladder, appendix and intestines. The placenta was well attached to the appendix so they just removed it. And they drained the 12cm diameter ovarian cyst. They had put me back together with stitches and staples with a drain coming out for blood and fluids. Time to heal now.

I spent 6 days in hospital and got home two days before Tadhg's 2nd birthday. Since then we have done a lot of grieving for a baby we wanted but are now looking forward to the future and have found reasons to be grateful for the experience.

I crocheted a little sleeping bag for a wooden doll (about the same size as the foetus, unintentionally) and we've buried it in the woods along with our autumn collection from our nature table- conkers, leaves, pine cones, twigs, acorns, feathers... all those things we collected together while I was pregnant and didn't know it. We've written a reminder on a wooden tree ornament that we'll get out each winter. So we'll always remember the baby we lost, happily and with gratitude most of the time I'm sure.

I am almost back to normal. I don't feel as sad and I can now lift the boys and roll about on the floor, carefully. Family life is getting back to normal too. Partly inspired by our hospital experience and partly by Tadhg's habit of burning himself on the oven and cooker, Brendan is into playing hospital. He has a little case of wooden medical bits and bobs. He puts on his nurse's hat and "writes" on a notepad while telling you that you CAN drink beer and eat cake but that you MUST NOT eat pizza or play tennis for two years- oh and he can swim!! That deserves a post all on its own but I'm so excited about it I had to pop it in there!

All in all it has been the toughest time we've had as a family. But we can keep it firmly in perspective. I know that so many people have much tougher times. We have so much good going on right now and so much to look forward to. We're all happy and healthy and have lots of adventures planned. More on that later :)

And finally a big THANK YOU to all the people who helped us out. To those who listened to me in person or on the phone when I needed to talk about it. To those who came by with yummy meals and treats for the boys. To those who watched the boys, in our home or theirs. To the ladies who came round and cleaned the house and folded the laundry and generally looked after me so well. For all the messages of support, especially to my friend who had a similar experience and who shared her story and read my 12,000 words. And to Steve and the boys for being understanding (less so before when I was nuts, but I don't blame them!) and caring for me and being patient with me when I needed some time to myself. Much love, Siobhan xx
Posted by siobhan 1 comment: