Helicopters, Dragon Boats and a Canoe!

It has been a very busy few weeks with Steve's work. Last weekend, CFB Gagetown was honoured by Fredericton with the ancient Roman tradition of Freedom of the City. Soldiers from the base paraded through downtown with bayonets fixed and drums beating. Steve was in the lead helicopter of a four ship flypast which apparently brought the roar of the crowd up a notch as they came down low and loud along Queen Street in a diamond formation. 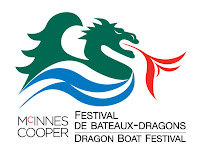 The following day was taken up by the McInnes Cup Dragon Boat Races. Steve was on the Base team which did fairly well. They placed fourth overall and came within one second of winning the Premier's Cup in their division. Brendan and Siobhan came to watch in the rain and had a good time until Brendan got a little too damp while playing in the puddles.

One of the biggest highlights of the summer had to be picking up our new canoe. Ali and her dad Harvey put in a lot of work and built us a cedar strip canoe for our wedding

gift. It has all sorts of different woods such as BC cedar, NB cedar, mahogany, birds eye maple and oak. She has beautiful lines and is light enough that Steve can put it on top of the Jeep by himself. We took it out a few nights ago for its first paddle. We took it down the Oromocto River and she paddles fast and true. We've already received several comments from friends and bystanders. Thank you very much for our special gift.
Posted by siobhan No comments: