It has been a full two weeks since we last posted and for good reason (sort of). They've certainly been the busiest two weeks since Tadhg was born. Biggest things of note have been...
Steve started university part time!
The Fredkid Fair (Siobhan volunteered for the Green Corner)
Birth Matters
And at home...
Selling stuff on kijiji including the boat
Fixing up the jeep and motorcycle
Steve built a bench for the deck
General house and garden stuff and decluttering for a yard sale next weekend.

And our normal day to day things have stayed the same. Playgroup in the park on Wednesdays and Tales for Tots in the library on Tuesdays (painting dinosaurs below) 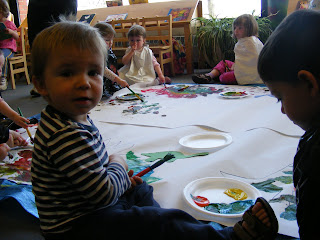 And this weekend we are off to Fundy National Park so I thought I'd better get this blog updated before it seems like a mammoth task and then I would miss stuff.

Tadhg is asleep and Brendan is happily playing on the lower deck with a wash tub of water, some plastic cups, a few rocks and I think I saw a big bit of wood being carried about. He's been in twice to give me a dandelion he's picked. Ahhhhh so sweet :)

Our friend Grace stayed for the afternoon the other day while her mummy was working. Tadhg conveniently slept all afternoon so I didn't really get a sense of what having three might be like! Here they are having a picnic in the garden. 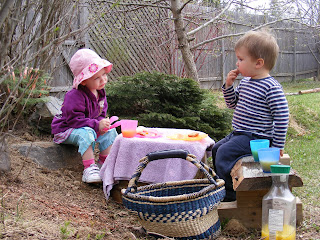 If it's nice weather we spend most of our time outside. Tadhg either sleeps inside, is worn in a carrier, sits in the swing, rolls around on a blanket under the big umbrella or jumps in the jolly jumper thing hung from a beam under the deck. Brendan can keep busy out there himself for hours while I potter about. We've had picnics, tea parties, turned over all the rocks for bugs, built a bench, made a rock garden... It's very different from last year- now that he is in full exploration mode. There is always something to discover.
Posted by siobhan