We've cleared the weeds from around the tree and Steve put up a tire swing using old climbing rope and a scavenged tire we came home with from a walk a while ago. There is just about enough room on another branch for a small plank swing too. 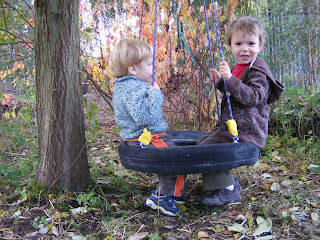 The ground is still full many of the nettle roots we haven't pulled yet so it will need to be properly turned over and cleaned up before they pop up again next year. 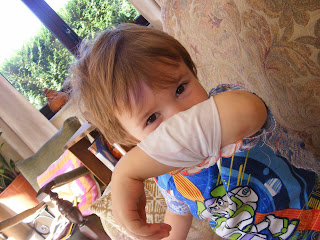 Here's Brendan showing off his "bandage" after a particularly bad brush with nettles. It was actually my fault and I was stung just as badly. I was pulling weeds around the garden and had a handful of nettles and thistles (with gloves on) when Brendan and Tadhg started a massive fight over something in the sand pit. I just completely forgot about the weeds and somehow picked Brendan up as he was about to attack Tadhg with a (sharp, metal) spade and promptly dropped him again as both of us were badly stung and scratched by the particularly vicious weeds. He reacted badly but a cold, wet napkin made it feel a bit better. I was still feeling it the next day... ouch!! 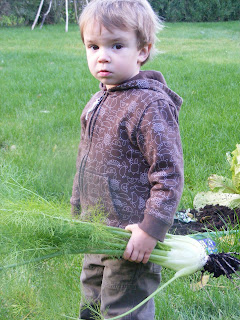 We harvested some lovely fennel bulbs yesterday and will do something with them today. I've never really used them so some research is required. Brendan wasn't really looking at the camera but was daydreaming when I took the photo above. I can't remember what we'd been talking about and have no idea what he was thinking but he stood there for a long while.

We've found a wood man not far from us and have asked for some logs and stumps. Hopefully they'll come soon and we can have fun deciding where to put them.

I've also sorted through the winter clothes and have tried to make it easier to get dressed and undressed by the back door- for those times when I just MUST put the boys outside IMMEDIATELY before I tear my hair out :)
Posted by siobhan