Had a busy week despite not going out much. On both Tuesday and Thursday we had some friends round to paint salt dough decorations and make wrapping paper. All the two year olds we know are girls and seem to be more interested in painting than Brendan is :) We mulled apple cider (non-alcoholic in Canada) and made fresh bread, flapjacks and strawberry kiwi jam to share.
On Wednesday we went for a long walk to the park and the woods and collected lots of treasures for our nature table. Tadhg slept most of the time and Brendan was most interested in rocks and sticks but we also found a birds' nest, some bark covered in lichens and some withering plants with different kinds of flower heads and seeds. The nest was technically still in the tree but it was dangling from a small branch by a bit of plastic that the bird had woven into it. I was pretty sure it wouldn't stay there for long and certainly wouldn't survive the winter so I thought it was okay to take it. 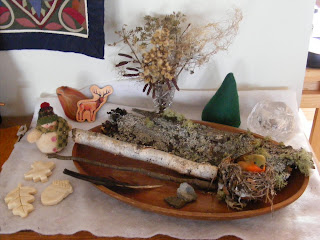 We gathered some evergreen boughs from the woods for making wreaths and decorating a bit and we also discovered that the city is putting in an ice rink in the park right at the end of our street. We went skating the other day but we're looking forward to Brendan having a go himself. We just need to find some second hand skates in his size. 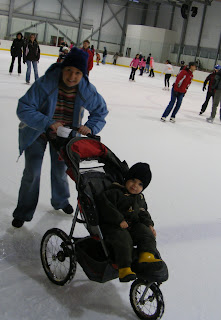