Didn't get to Belgium this week. Caitlin's flight was cancelled due to ashy atmosphere, we didn't have anyone to look after the boys and there was no room on the plane for them. We've re-booked and leave this Sunday now- and for slightly longer. We're "allowed" an extra four days because there is a public holiday in the first week which means we have a full weekend in the middle. Downside (less sleep, more expensive) is that the boys are now coming with us. I'm sure we'll have fun though, and Caitlin is coming over to Belgium to help out.

Here are a couple of pictures I took a week or two ago. Since this photo, spring has sprung and the leaves have emerged. We're making the most of the bug-free days and spending much of our time outside. 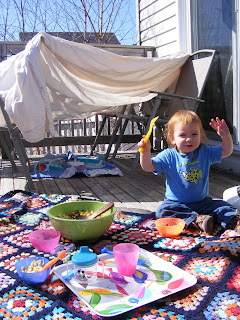 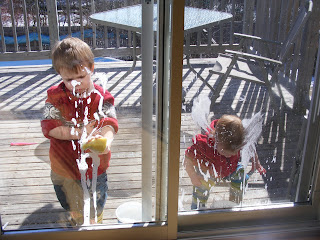 If I have stuff to do in the house I will often get the boys outside and then potter about inside: cooking, doing the dishes, laundry, sewing. I am always aware of them and just pop out every few minutes to let them know I'm listening. But lately they have discovered that they can squeeze under the garden fence. It's not worth adapting the fence because we're leaving so soon. Oh, well, I'll guess I'll just have to spend less time on housework and more time outside!

I am fascinated by the effect that being outside has on us. Too much time inside and the boys fight, they compete for my attention, they whine and pretend to be upset at silly little things and my store of patience gets overdrawn rapidly. Going outside immediately fixes a crappy morning and sorts us all out. They play peacefully, both together and individually, they manage fine without me around and they get totally engrossed in whatever they are doing.

Yesterday, Brendan popped his head inside to tell me he was going on a mission to rescue the "who dit noop". I had no idea what he meant and nodded and said "uh huh" and "good luck". I couldn't work out what the who dit noop was so I watched him secretly. He fetched the wheelbarrow, put a bunch of rocks in it, filled it with water from the rain barrel, put some more rocks in, stirred it with a stick, wheeled it across the lawn, dumped it out, took it to the dirt pile... I was thinking he must have abandoned his rescue plans and left the who dit noop to it's fate. He carried on shoveling dirt, then walked around the garden a bit and finally went to a tree at the bottom of the garden and stood looking up at the hula hoop sitting on a branch out of his reach. Ahhhhhh. He hollered, "mummy! can you help me rescue the who dit noop?"

You know if you say who dit noop enought times it definitely sounds like hula hoop! what fun!