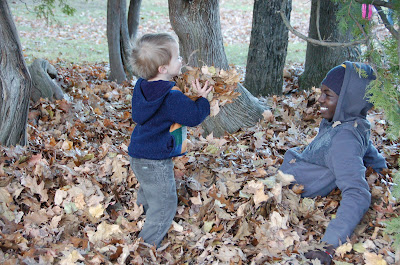 Went to O'dell park for a bit. Steve dragged Brian and King to the top of the hill to find a bunch of geocaches while the boys and I walked our favourite trail with our friends Cheyanne and Grace. 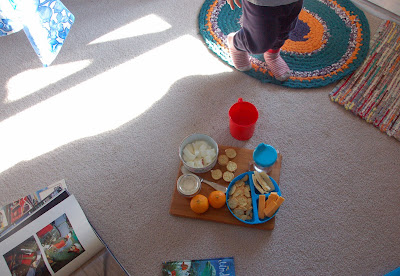 Snack time in the middle of changing the den/craft room into a more organised and attractive space. I'll do a before and after photo in the next couple of days when it's all finished. This is one of our regular snack/brunch sometimes instead of lunch food. Crackers, cheese, apple, homemade pumpkin jam, tangerines and water to drink. 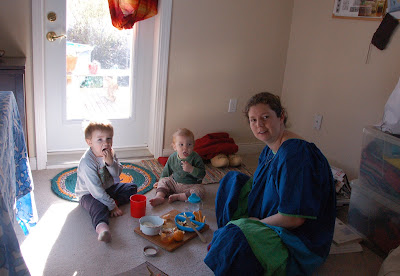 And Brendan loves his big lego at the moment. He builds "houses" in different colours and then takes them apart and rebuilds them. It can keep him occupied for hours. 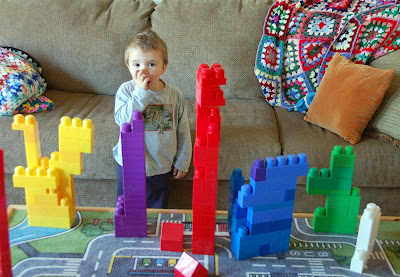 A few things I want to record at the moment...
Brendan says "I'll gis ko you" (I'll just show you) and "let I do it" all the time. It makes me smile every time.
We have a couple of tricky parenting questions that we are pondering at the moment. How to talk about death being one. Yesterday, B and I were marveling at a warthog on a Planet Earth episode when it was suddenly attacked and eaten by lions. What do you say? So we've been thinking about that stuff a bit lately (I mean me and Steve)
We've been going to gymnastics for a few weeks now and Brendan LOVES it. If we were to only get out once in the week for one activity, this would be it. So we've also been practicing forward rolls and balance beam stuff at home.
Tadhg is most definitely walking now. A good 10 steps at a time.