Tadhg had asked for a "green monster cake with one eye" and had reminded me every day for about a week- so this was the resulting effort. We had a wee party with three friends over for a couple of games and food. 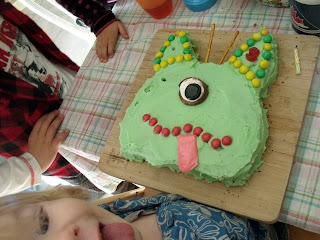 Tadhg was leaning over the cake so that I couldn't get a good photo of the whole thing. I said, "let me see the tongue" so he leaned back and stuck his tongue out. 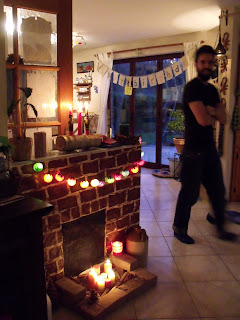 A few days later, with Paddy, Caitlin and Billy in the house, we lit the candle fire and tidied up while waiting for Steve to come home from work on his birthday. I was really excited because I had caved in and bought a bigger telly for him. It was a genuine surprise because I have been so anti-TV, let alone BIG TV, pretty much since we met, so he never thought we'd get one! It's not HUGE, so I'll still be able to sort out a cabinet or curtain or something to hide it :) For the moment, it was necessary to butcher the current cabinet in order to fit the telly on it... 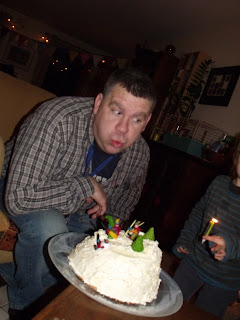 The surprise ski mountain cake was made by my lovely Polish friend Monika. It was very well made with special little touches and was absolutely delicious. There were better photos on Caitlin's camera- I will try to remember to add them. 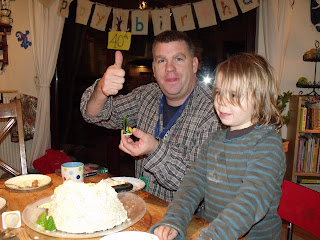 Thumbs up at being 40? Or just cake approval?