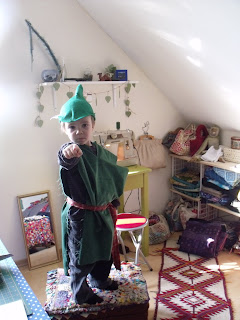 What a perfect day! Every Wednesday Brendan finishes school at noon and recently we've been leaving Tadhg with his babysitter for the afternoon so that we can have a special me-and-mama-only afternoon. Plans for today started on Monday when Brendan asked for help to become Robin Hood right at a time when I was trying to do a hundred things at once. On Tuesday he drew "a picture" of Robin Hood and we talked about what he would need. So after school today we had a quick lunch and then headed up to the room with all the crafty bits and pieces and put together a costume. 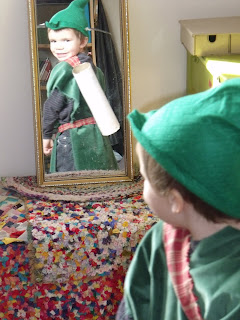 He loved choosing the fabric, measuring his waist, trying it on and looking in the mirror. He played with his wooden sewing machine as I sewed and "helped" by unravelling some thread as I hand sewed.
It was so much fun! 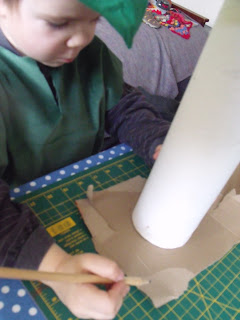 We made a quiver from an old poster tube. He drew around that himself- I'm flabbergasted by how his skills are developing. He has started drawing people and naming "things" he draws rather than just abstract scribbling and shapes. 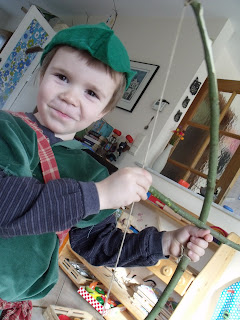 Then we went outside to find sticks for a bow and arrow. He practiced for about an hour and was doing well until he fell off the tricycle while trying to shoot while riding. The "special afternoon" still tires out my wee boy- he can still have a two hour nap some days!
So the tears have dried up and he's now sitting on the sofa watching robin hood and holding onto his bow and arrow. He has just told me "mama, if you pay taxes you have to go to jail." I tried to clarify the misunderstanding but he insists that I must not pay taxes or I WILL go to jail.
Ha- he now says it's okay, I can pay taxes if I want to because he will rescue me from jail.
We really don't watch much TV and are quite picky but I still wonder about what this stuff does to their heads:) 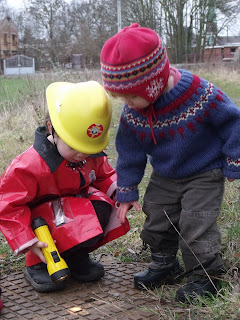 And one final picture. Here's Fireman Brendan out for a walk the other day. He stopped at EVERY manhole cover to check if anyone was trapped and needed rescued.